Seville City Council, through the Government Delegation, Major Festivals and Metropolitan Area, has put into service new traffic light games that have been installed in the surroundings of the Real de la Feria de Abril and other emblematic spaces within the special traffic plan promoted by the Mobility Area. This initiative includes a new design that defines two unique figures for the regulation of pedestrian crossings, a flamenco and a guitarist who respond to the name of Macarena and Paco as a reference “of a different proposal, which aims to reinforce road safety while paying homage to our traditions. After two years without being able to celebrate, we live a more accessible fair, inclusive and sustainable with different initiatives, but also, with more nuances and details than ever like these traffic lights, that favor the passage of people at strategic points” highlighted the delegate Juan Carlos Cabrera, who has attended the start-up of this service together with your designer, Xavier Alba.

concretely, The municipal initiative contemplates the installation of 6 pairs of traffic lights 5 crosswalks. They are located in the April Fair, in the area of ​​the front page on Avenida Fleet of the Indies; on the back cover, on John Paul II Avenue; and in the accesses from Virgen de Luján with Asunción. The last game has been installed in Antonia Díaz.

These facilities aim to calm traffic and favor the transit of people who come from the different stations and stops of public transport such as buses, metro and taxi as well as the car parks and that are concentrated in large numbers to access the fair through these points, that are regularized by the special plan of Fair. With the same objective, it has been added a similar game on the Paseo Colón at the height of the Real Maestranza.

These ephemeral installations correspond to a creation by designer Javier Alba, who proposed the initiative to the town hall after losing a family member in a hit-and-run in this area during the Fair of 2015. from that reality, faced this project that serves to honor all the people who have lost their lives in similar circumstances, promoting road safety awareness, but also "to extol two figures as traditional as a dancer like Macarena and a guitarist like Paco, two figures so Sevillian and at the same time so Spanish that they represent our most universal projection”. 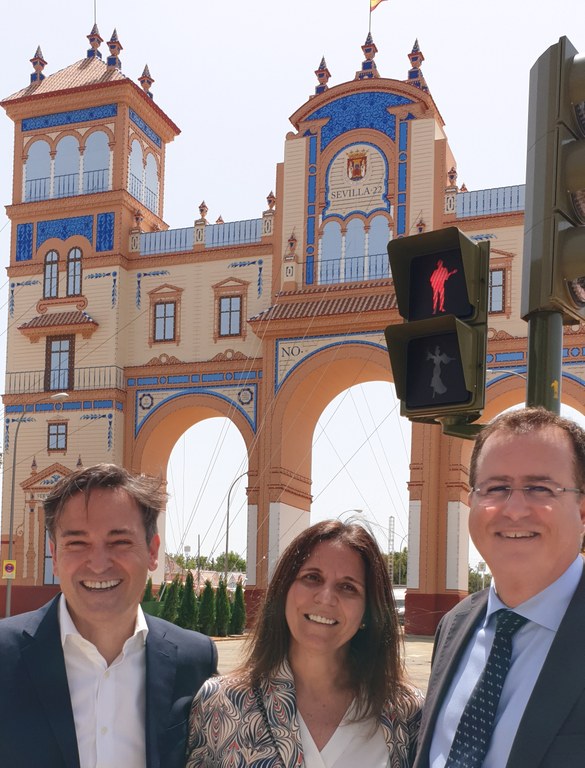