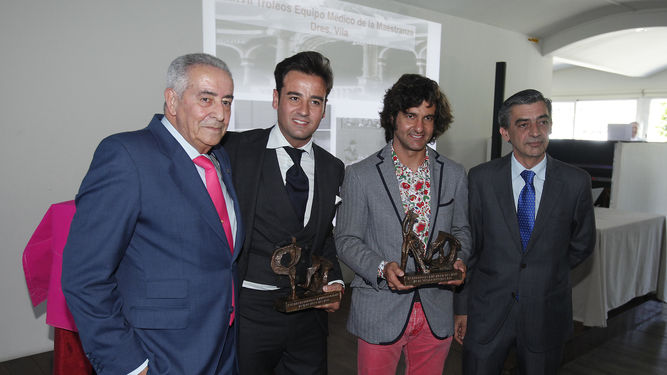 As usual in the spring bullfighting in Seville, the medical team of the Plaza de Toros de La Real Maestranza delivered in the middle hot day of its traditional awards, the famous "take off".

On the terrace of "Big River", the flower of the medical profession chatted with taurine invited press in the run, but who monopolized the attention were the winners: Jaime Padilla, Providential Quita Award, Pure gold silver dresses, last year, one day 17 April took a divine cloak his companion Mario Galán, coming from a faulty pair of banderillas the fifth Miura pm.

And of course, José Antonio Morante, The right-hander La Puebla del Río, I cigar in hand, "Cohiba are the best", he confessed in petit committee, He chatted amiably with press, general doctors and friends attended today the prize. It was him 8 April last year when Morante made a parry (Remove Artistic Award) of those who leave the willies, one of which give reason to think that the party is an Art, Morante and an artist, Pure remove the 3rd evening Victoriano del Río.

Once in the Hall and Octavio Mulet and Ramón Vila opening "paseíllo", doctors were delivered accompanied by maestrantes, Sculptures Nicomedes, for whom there was a memory having recently died.