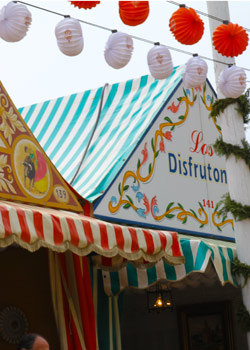 Since the beginning of the April Fair delimiting spaces were being, formed by a light covered with candles or fabric awnings, initially were used as shaded area in which traffickers may close refuge for commercial operations at the ones that looked interested. These “boxes” canvas were increasing as the Trade Fair pens that would diminish to the present day with configuring Fair Booth.

The origin of the booths as such dates back to 1849 when the city of Seville install something like a tent, order to monitor the fairgrounds. Curiously,and this “box”, despite their purposes, became famous for their good festive mood.

The stand at the Feria de Abril has two quite distinct and separate spaces:

– the front or nobleman, that is what we see from the street and is where coexistence is between the members of the house, where dancing, singing and generally place the tables to enjoy fine wine or fine Manzanilla, although lately -very despite purists- is catching on “rebujito”, refreshing drink that is drunk in astronomical quantities and born of the marriage of Manzanilla Sanlúcar, Seven Up or Sprite and lots of ice…

– the backroom -inside the house- in which are located the kitchen, the bar and toilet services.

We bring this section some Ordinances of the April Fair we have similar interest to aquellos visiting him fairground:

STRUCTURE AND ASSEMBLY OF HOUSES

The module is the unit of measurement of the booths. It has a width of four meters and a minimum depth of six. On this basis the basic structure of the house rises. In order to keep the ornament, harmony and uniformity of the whole, structures facade modules, to fund 8 meters (if the dimensions of the grant allows), will be mounted by HE. City Council may allotments holders have structures on your property for rent or for covering funds or rear areas, to the limit of the grant. The structures of the corner booths will be installed in its entirety by the City.

Notwithstanding the foregoing, be tolerated those concessions booths until the date of adoption of this standard had been using own structures to the front line, provided they meet the standards set out in this articulated.

The first body of house should be covered by canvas listed in red and white or green and white. The lists will have a width of 10 centimeters and will be printed on both sides of the mat. The positioning must be lined vertically toward the ground, on his side fall from the highest points of the trusses, can be coated internally with traditional decoration materials, such as lace, mantones, lattice, etc..

In the front, for closing the stand in his front line and under the scarf, Striped canvas curtains will be placed identical characteristics and color as those used on the cover. These curtains are arranged in panels that allow to be collected on both sides of each module, so that vision is permitted from the outside of the first body of shed.

From front line and outward enclosure shall be affixed, formed by a railing, either metal or wood, but never for work, Traditional design and painted in green, with a height not exceeding 1,50 meters, which may not protrude from the front line over 1,10 meters and in no case exceed the line of lampposts Walks. The minimum passage width shall be 1,20 meters.

The booths must remain open, collected with curtains, in the hour horse ride and evening, coinciding with daylight illumination.

For the decoration of the first body considered traditional materials will be used: lace, screen, paper, totally forbidden the use of plant materials in any area that is visible from the outside. Use both this task and for any area adorns booth materials derived plastic or oil shall be prohibited.

In each house of the Real will be available for a PA, whose capacity must be limited to a maximum of 100 dBA., being totally banned the use of loud speakers, in any case they must be placed into the interior of the booth itself, controlling that in no case affect the surrounding.

Assembling the stand must be completed, for the purpose of waste disposal and inspection by the Municipal Services, at seventeen hours of the day preceding the night lighting test. During the fifteen days preceding the celebration containers will be installed on the edges of roadways in order that they would settle on Mount leftover materials. These containers will be removed the day before the start of the celebration, at seventeen hours, forbidden at all times to deposit surplus materials and waste on walks or driveways.

Holders of administrative concessions, they shall remove its means and within a period not exceeding seven days once the Fair, of all the elements that have made up your booth, including waste (debris and garbage, etc.).

During the celebration of the Fair, residue of the booths will be drawn to the outside in bags properly closed, only, between six and nine in the morning of each day of the Fair, deposited in the steel leaving the roadway edge.