After the Passion Week, Seville, to mid spring, becomes the bride of the World, and for this he preens with perfume and orange blossoms. He dresses her flamenco dress, rayclinic blancas, Red and green, with steering wheels farolillos, and gives us the Fair. And, as a prelude to this the Real Club de Andalucía hitches organizes the traditional display Carriages at the Royal Cavalry.

This sample is from 1984, year of the foundation of the Real Club de Andalucía hitches a group of friends, led by Don Antonio Sanchez – Fernandez Bedoya – Mensaque, they perceived loss of traditional horse carriage our fairs. Were labeled as primary objective the promotion of engagement in all specialties, and as one of the means to achieve this end they organized the first exhibition, and quite rightly chose the most appropriate place in the whole city, Plaza de Toros de la Real Maestranza Cavalry. Needless to say, that actions have been successful, and hitch today in Seville and Andalusia has recovered, reaching upper bounds to the past.

The trajectory of the Exhibition has been marked by the sponsorship of various public and private institutions; HE. City of Seville, the Royal Cavalry, newspaper ABC and Caja Rural de Sevilla.

The contest runs on display two phases, A test on the street Adriano, and B within the Bullring.

In the Exhibit A, hitch is stopped and the footman or lackey dismounted. It is scored by five judges, Car, Fittings, horses and occupants.

The cars involved are those traditionally used in our fair since the nineteenth century, and many, museum pieces, belong to this time, breacks, planters, faetones, carretelas, landeaus, milords, sociables, etc.. Gig build quality is scored, preservation, Cleaning, Boom height and accessories like lanterns, voleas, balancines. 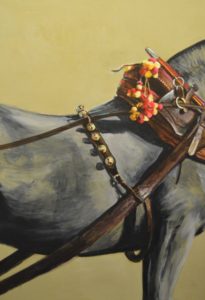 The fittings are usually the calesera, typical of our land; the English with collerón or breastplate and Hungarian. Trappings of the quality of implementation is assessed, Leather, hebillaje, Sewing, borlaje in the case of calesera, Cleaning and maintenance, correction mouth and placement.

Horses, especially, usually of pure Spanish race and mostly from herds of car owners. In fewer Arabs and Crusaders. No shortage of mules, animal that historically, in Spain, He has always been engaged in Sevilla and has supervivido thank the fans. Of these noble quality is judged gross, Cleaning, -form physical presentation, braided manes and tails, heridas the rozaduras-, herraje – inclination of the hull, positioning the horseshoe.

As occupants, the coachman and footman must be dressed in line with fittings. Passengers, females usually, you go dressed in white veils, Spanish garment, whose use is recovering, through this initiative.

In the Test B the evolution of the hooks inside the bullring are judged by a different jury the previous, executing movements are selectable participant. Account is set printing; the coachman, its position in seat, how to guide and take the reins; Drive in horses, placing the heads, Cadence, consistency, and the bend in the turns.

This show color, tradition and art, is, definitely, the highest concentration of carriages of the world both in quantity and quality. It involves hitches Sevilla, Andalucia and Spain. And most important, preserving our ancestral customs.

We can only describe the tumult that forms, that day on the street Adriano, horses and mule

s different coats; fittings with shiny polished hebillajes as precious metals; cars of all kinds and colors; -attired occupants disused, rescued, forever, Oblivion; brimmed hats, Pets, catites y chisteras; tinkling of bells whose sounds reverberate in the walls of this street, transporting us to other times unknown; impatient neighing of animals. Suddenly, unexpectedly, a whip is traya, silence, the beasts are recomposed, drive and enter the arena, execute their evolutions between pasodobles and applause, and goodbye to step, teachers as winners, by Prince door.

With this act, Real Club de Andalucía hitches again renew, year after year, his promise to Sevilla, contributing to not forget his past and future broadcasting traditions that should not be missed. 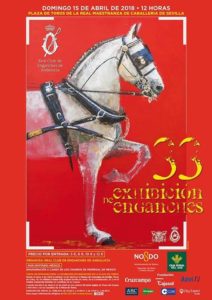 This year the Exhibition XXXIII Latches Fair Sevilla held. The event date is the 15 April morning and represents the prelude to the Feria de Sevilla. The ring can be seen maestrante carriages with fittings to calesera and English with coachmen and footmen dressed to perfection, as well as numerous ladies dressed in traditional Spanish flamenco and wearing mantilla, prelude to the Seville Fair.

About the 10.00 hours, will begin arriving participants hitches Street Antonio Díaz, Paseo Colon and Calle Adriano, where it will test presentation. At 12.00 hours will be the driving test. Enganches the XXXIII Exhibition will begin in the bullring of the Royal Cavalry of Seville.

The exhibition will be opened by the Charros de Pedregal in Mexico with a performance composed of more than 40 people which will provide the audience with a beautiful show horse and dressed in their tuxedos regional, Mexico leaving some Sevilla.

Tickets for the XXXIII Exhibition Enganches will go on sale from Monday 2 April to 14 April at the following locations:

And from the day 9 April also in:

An exhibition full of surprises.